Thinking Again About our Photographs:The Photograph as a Way of Thinking, Part 2. Written by Dr Linda Berman.

‘Photography is a medium of thought; it is a means of discovery and expression, a way to decipher patterns, to work out ideas, to find and tell stories.’ Spirn

In last week’s post, we began to explore the photograph above, knowing nothing about its content or its provenance. This week we continue to examine the image and then discover the known facts about it.

Let us begin by looking at the women’s body language.

The posture of the woman on the left is relaxed, hand resting on her lap. She leans towards the other woman. She is definitely addressing her. The shape of her mouth could indicate that she is speaking in a rather strident manner.

The woman on the right looks older, although it is difficult to gauge their ages. She is not  responding. Her body language contrasts with that of the other; she is far from expansive in her gesture. Smaller in stature than the younger woman, her body language indicates a passive, self-protective, closed attitude, as if she is feeling uncomfortable.

She stares at her raised foot, right hand clamped over her mouth, chin and gaze lowered. The other hand crosses her body. This is seen as a ‘barrier signal’ by Desmond Morris. Is she stopping herself from responding? Her gesture indicates suppression of speech.

What might she be thinking? She does not appear to relish what is being said to her. She does not look pleased.

Making no eye-contact with her companion, she appears still, although we cannot know whether her foot is kicking up and down. Somehow, it just looks raised, for her perusal. Her eyes are looking down, almost closed. This is a ‘Cut-off’ gesture; it is the ‘Evasive Eye.’ (Morris) It indicates a wish to withdraw from the other. It appears as if she is visually blocking out what is happening around her, for she cannot really be that interested in her own foot.

What might she be feeling? Could it be guilt? Anger? Fear? Meekness? An urge to kick, or flee? We cannot know.

As we peruse the picture in depth, more questions emerge:

What language are they speaking and what might they be saying?

Who took the photograph?

What is the date of the photo and what was happening in the wider world at this time?

Who are the women? What is their relationship?

Are there other photographs of them?

What is the emotional effect on you, the viewer, of this photo?

Whilst Yvonne could not answer all my questions, she could furnish me with some important facts. Other facts are lost in time, for the image will keep some secrets.

The picture was taken in the back garden of a now demolished house in Cheetham Hill, Manchester, where Yvonne’s mother and her twelve siblings were born. The women are her grandmother, Rose, and her great-grandmother, both of whom died before she was born. She ‘knows’ them only through family stories. And through photographs.

She guessed the date as the beginning of the 1900’s. Yvonne continued to describe the image:

‘The women were extremely Orthodox Jews, hence the hat and Bubba’s (Yiddish for [great] grandmother) sheitle (wig worn for religious purposes). The hat belonged to Bubba…..it was a Russian hat, she came from Vilnius, Lithuania. I don’t know what they were talking about and they only spoke Yiddish to each other. Life was hard and they all lived together. Rose had 17 pregnancies, 13 infants survived. The children brought each other up because Rose was always pregnant. I have a photo of my mother in her wedding dress rushing up the steps of the house straight after the Chuppa(ceremony) to be with Rose who was on her deathbed. She died aged 42.’ 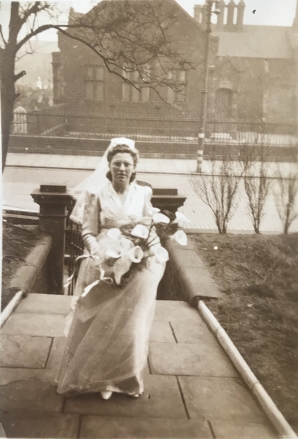 What poignant photographs of an impossibly joyful and excruciatingly difficult moment in Yvonne’s mother’s  life! How graphically has the camera frozen the image in time, chronicling for eternity the anxious bride as she visits her Mother’s house.

Then, in the right hand image, like some ethereal , almost spectral figure, she is there, at the bedside, observing her dying mother. It is as if the camera has captured the spirituality of the moment, and we are Rose, viewing her daughter through misted and fading eyes.

How much more can we legitimately add to these photographs from our own knowledge? Dorothy Lange said that ‘The camera is a tool for seeing without a camera.’ In similar vein, Spirn perceived that ‘The image is a form of thought.’

We can thus use the photograph to discover a way of thinking based on visual clues and markers. If we add some historical and familial knowledge to these clues in the tope photograph , for example, the Russian hat, we can be fairly sure that the two women were immigrants from Eastern Europe:

‘Exodus from Eastern Europe
It has been estimated that some 2.7 million Jews migrated west from eastern Europe between 1881 and 1914. Many were seeking work or a better standard of living. Others sought to avoid compulsory military service or persecution. The assassination of the Russian Czar in 1881 was followed by a series of campaigns (pogroms) against Jews in the Russian empire: Jews were forbidden from settling on or owning land outside towns or moving between villages, and restrictions were placed on their entering higher education or the professions.’

Spirn has pointed out that ‘research shows that perception and cognition are intimately linked’. In terms of Yvonne’s photographs, we can add the visual clues to her own comments and our knowledge of history and human nature. All these aspects can help us reconstruct the fragments of  long lost stories, that otherwise might be forever lost in time.

Perhaps you, the reader, might be able to look at your photographs with a different eye now?

Rose and her Mother dressed for best.