How Can We ‘Become Animal’? Challenging Otherness in Human/Animal Relationships through Art. Written by Dr Linda Berman.

‘Art then is fundamentally a product of and for culture and one that points to foundational concerns regarding what it means to be human. Yet the artists working with animals… point to and cast bridges across the divides to the non-human worlds of animals. What a wonderful disorientation takes place in this gesture of reaching across spaces and times.’

The animal has been marginalised in art , reflecting rigid attitudes; thus he is often seen in profile, or as an adjunct to humans. He may be depicted in a group, lacking identity, or categorized in species taxonomies.

In the painting above, the cat and monkey function almost as a decorative adornment to the artist; they are behind her, peripheral and omitted from the title.

Whilst animals may be marginalised in our society, this has not always been so. In the past, humans lived and worked with animals. Over time, however, the relationship became distant and people acquired anthropocentric attitudes; animals were taken from their rural habitats into captivity.

We invaded their countryside, but, ironically, humans now see animals as trespassers on their land. A split between nature and culture developed; animals were seen as ‘the other.’

I chose to challenge this through painting. I wondered: how could I represent animals and respect them as sentient beings? Could I understand the non-human animal or find a way of dissolving the boundaries between ‘us and them,’ and ‘become animal?’ (Urpeth, in Calarco and Atterton)

Becoming-animal is not about imitation or imagination. It is real, an interconnectedness, involving reciprocal respect. It precludes reductionist attitudes. It is a process of deep mutual finding, intensely feeling into the other’s being, requiring creative, joined-up thinking.

I was mindful, whilst choosing to paint wild birds, of the idea of hospitality, welcoming all living things who share the earth with us, before knowing or categorizing them. I referenced the portrait, as it usually privileges the human form, challenging human superiority over animals.

I photographed the Martial Eagle, Marvin. I grew to know him and I think he knew me; our relationship animated the painting process. Paradoxically, he grew more ‘real,’ as I painted, as if I were honouring him with a portrait.

The animal gaze was at the heart of my work.  This is no ordinary gaze; it is that of another being, asserting his right of agency. It challenges assumptions of human primacy. It is there in my paintings of wild birds, mugshot- style, challenging marginalization, facing us.

Painting the animal portrait, without objectification, accords the animal centrality, revering individuality and consciousness.  Painting allowed a reverie, a connection with the subject that cannot be adequately expressed linguistically. Through art and music we can create a ‘becoming other’:

‘No art can be imaginative or figurative. Suppose a painter “represents” a bird; this is in fact a becoming-bird that can occur only to the extent that the bird itself is in the process of becoming something else, a pure line and pure color….. imitation self-destructs, since the imitator unknowingly enters into a becoming that conjugates with the unknowing becoming of that which she or he imitates….The painter and musician do not imitate the animal, they become-animal at the same time as the animal becomes what they willed, at the deepest level of their concord with Nature.’ (Deleuze and Guattari)

I reflected upon what animals might feel and the nature of our interconnections with them. Evidence that animals have feelings is strong, revealing a neurochemical basis for their emotions. Indeed, the appearance of frightened animals resembles ours: wide eyes, body in flight mode. Descartes thought animals were machines, that they lack consciousness and cannot feel pain. 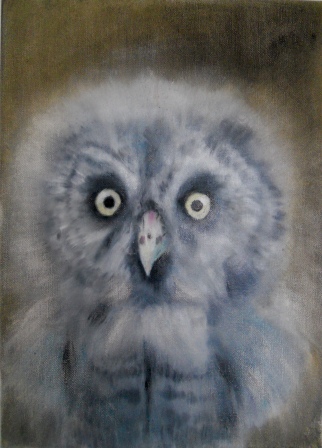 Buddhists also believe in the connectedness of all living things and many people close to animals experience this bond. Science shows that ‘cross-species intimacy penetrates to the tiny cells in the brain.’(Acampora) When humans empathise with animals, potential emerges for a real meeting.

Thus I entered the animal’s world and experienced how it might be to ‘become animal.’ This concept allows species boundaries to be elastic, enabling a shared experience of each other and the world.(Calarco and Atterton)

For Deleuze and Guattari, ‘flux, change and relation are….more real than permanence, stability and identity.’ (Urpeth, ibid). They recommend flexibility, uncertainty and connection with others, rather than rigidity. They advocate creative transience, instead of immovability, which prevents real contact, and the development of a state of ‘becoming animal’ that is mutually transformative, in relation to music and art:

‘Music takes as its content a becoming-animal… the birds find expression in staccato notes that transform them into so many souls….. the human musician is deterritorialized in the bird, but it is a bird that is itself deterritorialized , “transfigured”, a celestial bird, that has just as much of a becoming as that which becomes with it.’

Marvin’s portrait has something of me in it ‘deterritorialized,’ perhaps the part that likes to ‘fly free.’ As I painted, I lost myself in another; I was becoming bird. Marvin’s ‘becoming’ resides in his ‘transformation’ into a bird worthy of a portrait, like a revered ancestor.

In representing ‘Marvin’ like this, I challenge animal alterity. As I brought the birds into being on canvas, I translated across vernaculars, from the photograph. What emerged was a commonality, human traces in my birds’ eyes. As the birds emerged, I found myself greeting them, welcoming them to the world. I felt part of them, for I had internalised something of their essential nature.

Leave a Reply to Do We Always Have to Know? Part 1: Thinking, Waiting and Not Knowing in Life. – waysofthinking.co.uk Cancel reply