Can Gossip Ever Be Appropriate? By Dr Linda Berman. 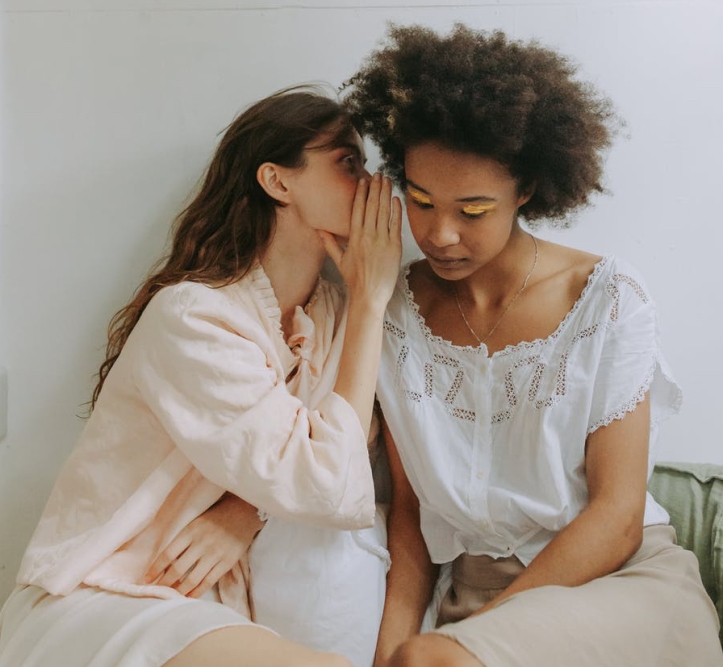 “Gossip isn’t scandal and it’s not merely malicious. It’s chatter about the human race by lovers of the same.”

“If you want to know how far gossip travels, do this – take a feather pillow up on a roof, slice it open, and let the feathers fly away on the wind. Then go and find every single feather and re-stuff the pillow.”

We all gossip….. don’t we? Why do we do this? Is gossiping always malicious?

There are differing views about how harmful, or otherwise, gossiping is, as expressed in the two quotations above.

Gossip is talking about someone behind their back. It  generally gets a bad press.

Yet there are instances when gossip can be positive and perhaps appropriate, especially when it is to do with social bonding, or spreading important news or information, or talking glowingly about another’s success.

Such gossip may have a good effect, creating links and connections with others and disseminating important social facts.

In addition, gossip can serve to indicate to all involved  which kinds of behaviour are socially acceptable and which are not.

Research by Megan Robbins, an assistant professor of psychology at The University of California, (see article for reference), indicates that, out of a sample of 467 subjects, three quarters of their gossip was neutral, with 15% being negative and only 9% positive.

Professor Robbins makes a further point about some gossip being appropriate and important to us:

‘“It’s something that comes very naturally to us” — an integral part of conversation, information sharing and even community building.’

Negative gossip, on the other hand, can destroy relationships, creating bad feeling as it spreads from one person to another, like a game of super-wicked Chinese Whispers.

“Rumour has a hundred mouths.”

There are several reasons for such gossiping. Sometimes it can involve feelings of wanting to ‘get one’s own back’ on another person, or it might be about schadenfreude, when people feel pleasure at others’ misfortunes.

Those who feel envious of others may also spread malicious gossip. All this may say more about the gossips themselves than their victims.

“Never judge someone’s character based on the words of another. Instead, study the motives behind the words of the person casting the bad judgment.”

“People like to think the worst. They like to have hushed gossip sessions and point their fingers at someone’s problems that are more obvious than their own.”

“A boomerang returns back to the person who throws it. But first, while moving in a circle, it hits its target. So does gossip.”

Beware of those who gossip maliciously, for they do so only for themselves, perhaps to boost their own self-image at the expense of someone else.

“People gossip. People are insecure, so they talk about other people so that they won’t be talked about. They point out flaws in other people to make them feel good about themselves.”

Often, gossip comes back to hit the gossiper in the face like a boomerang, as in the Norman Rockwell image above. If we send out bad vibes and negative energy, we may get this back along the way.

Many people enjoy gossiping, over a cup of tea with a friend. Scandalous details about another, hearsay, idle talk, rumour, tittle-tattle – all are material for those eager to enjoy ‘juicy’ gossip about others.

“No one gossips about other people’s secret virtues.”

“If you haven’t got anything nice to say about anybody come sit next to me.”

Negative gossip can be very painful and distressing for the victims of such malice. It can cause untold emotional pain and hurt.

It may also be important not to engage with the gossip when we hear it, as anyone who gossips to us may also gossip about us.

“Gossip is a very dangerous tool. We should be more wary of the gossiper, and not the gossip they’re trying to relay to you.”

Such negative talk may reflect back on the person who is seeking it. 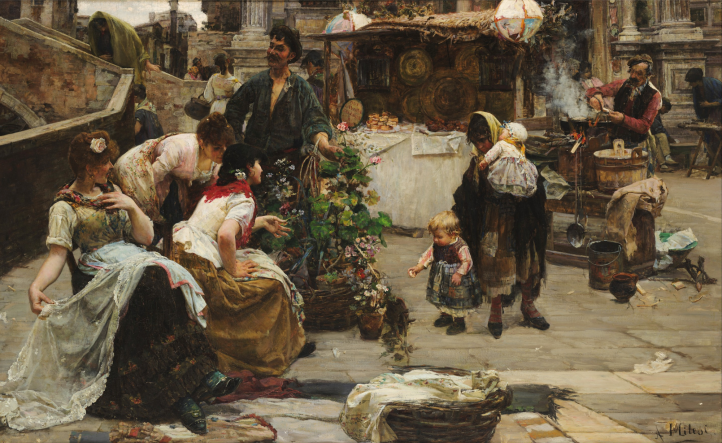 “Gossip is always a personal confession either of malice or imbecility.”

“How much time he gains who does not look to see what his neighbour says or does or thinks, but only at what he does himself, to make it just and holy.” 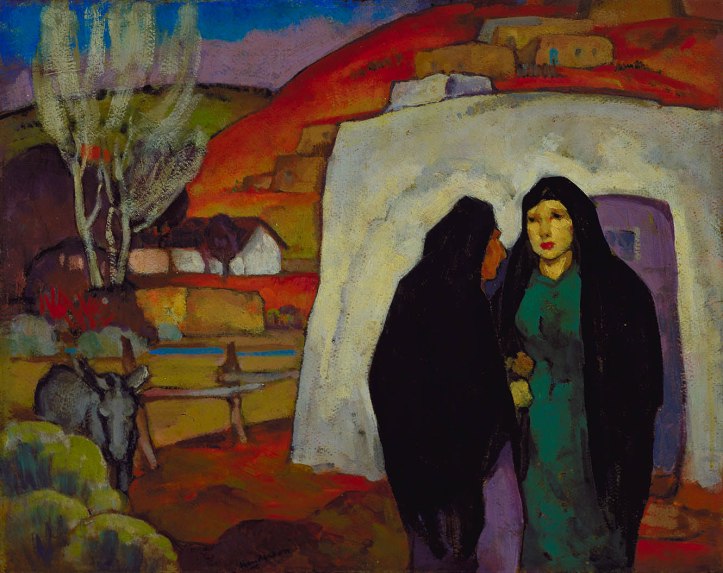 “All the whispering, glaring, pointing and judging makes them no better than whoever or whatever it is they’re gossiping about.” 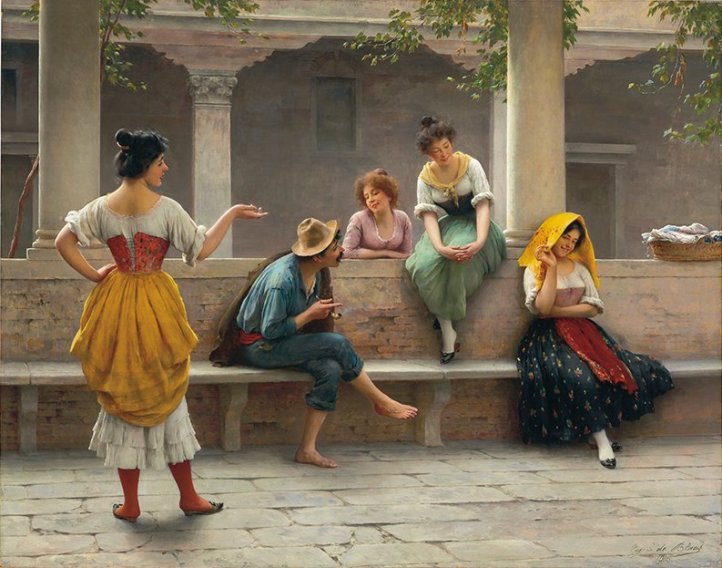 Sexist comments abound, like the one above, about women being gossips. Interestingly, the comment is from a woman. Yet the truth is, men certainly gossip too.

Research indicates that men and women gossip in equal amounts.

It has been difficult to find paintings of men gossiping. Why have women been popularly associated with gossip more than men?

An article on Medium.com explains how gossiping became associated with women in a patriarchal and discriminatory way in the Middle Ages:

“According to Silvia Federici, an American activist:

Female friendships were one of the targets of the witch hunts. It was in this context that ‘gossip’ turned from a word of friendship and affection into a word of denigration and ridicule.”

“Associating gossip with women as a negative implication, they are portrayed as incapable of engaging in things that hold the utmost importance. It is understood that jobless women don’t have anything better to do for a pastime. (Source: Eat My News)”

All the great world religions forbid gossip, scandal-mongering or speaking badly about another person. For example, in the Jewish faith, the rule of Lashen Hara forbids people from spreading negative statements about another, which is seen as sinful.

In the Christian and Islamic religions, there are also warnings against gossip:

“But shun profane and idle babblings, for they will increase to more ungodliness. And their message will spread like cancer.” 2 Timothy 2:16-17.

Allah Ta’ala says: “Oh you who believe! If a wicked person comes to you with any news, ascertain the truth, lest you harm people unwittingly, and afterwards become full of repentance for what you have done” (Quran 49:6).

Similarly,  the Hindu and Buddhist principle of Karma is about how we act in the world. If we do bad things, there will be consequences for us. Equally, good energy will come back to us if we do good deeds. It is a matter of action and reaction.

We can stop ourselves gossiping in a negative way by, first and foremost, thinking before we speak. If we weigh up the possible consequences, speaking badly about others will not seem an attractive prospect at all.

It is important to develop ways of thinking which help us to refrain from expressing malicious thoughts about other people.

The following quotations sum up how we might avoid gossiping: 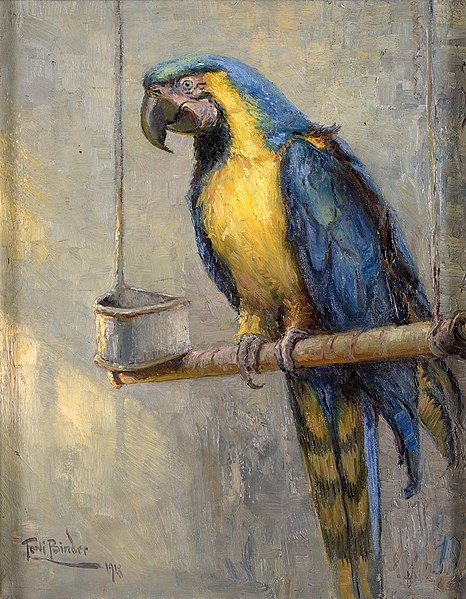 “Live in such a way that you would not be ashamed to sell your parrot to the town gossip.”

“How would your life be different if…You walked away from gossip and verbal defamation? Let today be the day…You speak only the good you know of other people and encourage others to do the same.”

Please spread some positive gossip about my blog- to your friends or online! It will be sincerely appreciated. Thank you!